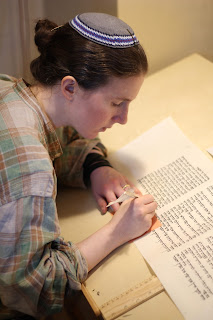 Yonah Lavery-Yisraeli currently lives in Hamilton, Ontario, though she has lived around the world and did most of her formal Torah studies in Jerusalem. Her semikhah is from R. Elisha Ancselovits. She works as a soferet sta"m and is a faithful weeklong minyanaire at Beth Jacob Synagogue. She is honoured to read Torah there sometimes and can do so in Moroccan and Ashkenazi nushaot, but these days primarily Bene Israel nushaot (Cochini and old Baghdadi), which she was taught by Victor Abraham.
Her bet midrash, Hamilton Beit Midrash, is so far the only place in Canada where Jews can study Talmud intensively, using traditional methodology and languages, regardless of their gender. But hopefully it won't be the only one for too long.

If she could use a time machine once, it would be to give Ramba"m Patañjali to read instead of Aristotle. 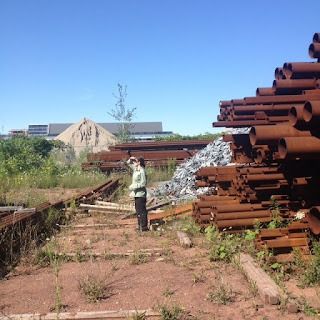